Guide to the Animal Kingdom Episode 1: The Sponges

There’s probably no better place to start a tour of the animal kingdom than the sponges. In terms of anatomy, sponges are the simplest animals, lacking organs, limbs, and much more. Although they are of course famous for bringing us Spongebob Squarepants and for their contributions to human hygiene, sponges are otherwise a bit invisible to those of us who don’t live in the sea. 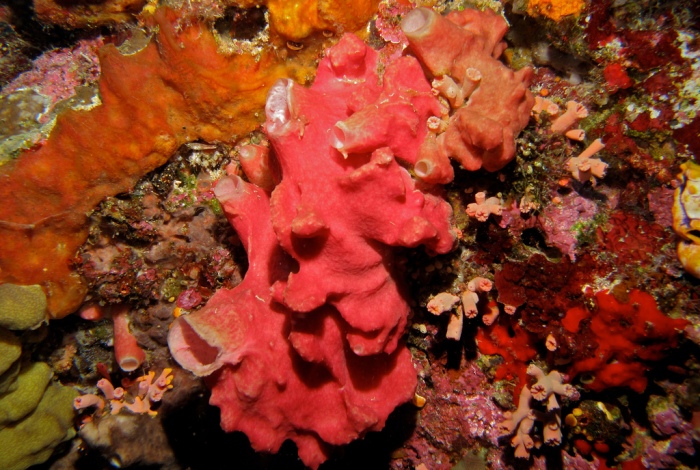 Over 8,000 species of sponges (or Porifera, “pore-bearers”) are known from marine environments around the world. They vary greatly in size and shape, from crusty sheets several millimetres across, to chimney-like giants of over 2 metres, but tree-, lettuce- or cup-shapes are also common. Sponges can live solitary lives, but are often an important part of tropical reefs as well (along with the unrelated but often similar-looking corals), where they provide a home for many other animals.

Sponges start their lives as tiny clumps of cells that swim about the sea until they find a suitable bit of rock (or other hard surface) to settle on, after which they attach themselves and grow up to become mature sponges. Their skeletons usually consist of networks of tiny needles made of silica or calcium carbonate that give the sponges a somewhat flexible but sturdy structure. Though there are some carnivorous species, most sponges are filter-feeders: they suck water in through their many holes and expel it through a central canal, while specialised cells inside the sponge filter tiny food particles from the water.

One of the most impressive features of sponges is their nearly unlimited ability to regenerate, which results from the fact that they are much more loosely multicellular than other animals. A sponge can be completely separated into its component cells, after which the cells will simply aggregate and form a new sponge. Indeed, one way for sponges to reproduce asexually is to make a bit of the body fall off, which will then float away and grow into a new sponge elsewhere.

Sponges can reproduce sexually as well, as shown by this barrel sponge ejecting large amounts of sperm into the ocean, hoping that some of it will encounter a nearby colleague.

Luckily for the sponge, there is no need to be selective, as most sponges are hermaphrodites. As soon as one sponge’s sperm is sucked up by another of the same species, new swimming clumps of sponge cells are produced and the cycle starts anew.

Next Episode: The Stingers – Corals and Jellies